Are Stocks and Bitcoin in a Market Bubble About to Burst?

If it feels like a bubble, it probably is. Except, maybe if it’s not… or maybe it is, depending on your perspective.

If are trying to get a sense of direction of the financial markets, your head may be spinning right now.

The stock market just reached all time highs despite a crippling pandemic that forced millions out of work. And bitcoin is up over 330% in the past year pushed by institutional investors and more FOMO. If history is any teacher, both of these markets are giant bubbles on the verge of bursting. However, as you may have heard a million times in the past 6 months, these are unprecedented times.

Trying to get a sense if we are in a financial bubble can be exhausting. If you stay in the markets and it bursts, you are going to kick yourself. If you get out and we continue our meteoric rise, you will also be kicking yourself. Financial pundits are no help either. They are good at examining factors of both sides of the equation but they are never of any real use.

In fact, here is an image of a financial pundit after they just told you we may or may not be in a bubble… 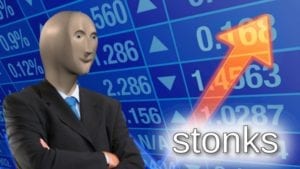 The problem is that a case can be made for both sides of the equation. And it really does depend on your perspective. Sorry, this is no help either .

The Case For and Against the Bubbles

David Rosenberg is a long-time market bear who served as Merrill Lynch’s top North American economist from 2002-2009. He makes some valid points in favor of a stock market bubble.

“Based on our market valuation work, we are anywhere from 20% to 30% overvalued, ” he told CNBC’s Trading Nation last week. “What’s holding the boot together is basically zero interest rates. As long as rates remain where they are…this bubble that we’re in is not going to burst any time soon.”

So, I guess that’s a maybe from David.

He does have solid reasoning here. Despite what the market is showing, the economy continues to struggle amidst record high unemployment. In any other universe, such massively negative factors would drive the market down into a massive hole.

However, unlike the 2008 financial crisis which also saw record unemployment, this depression wasn’t created by an economic factor like the housing market crash. It was created by a virus that caused a massive quarantine.

The market could have absolutely baked that into its factoring already and now expects a continued rise with the incredibly fast release of a vaccine. Because if the fundamentals remain strong, the vaccine could put a lot of people back to work very quickly, especially in the retail and hospitality sectors and this market run could continue into the foreseeable future.

The Bitcoin situation is even harder to read than the stock market. Primarily because this asset class is still so new, so there is no real precedent to look at when determining its direction.

If you recall, Bitcoin’s meteoric rise in 2017 was 99% driven by retail investors’ FOMO (Fear Of Missing Out). If you also recall, hundred of thousands of people lost their shirts during the ensuing crash that saw Bitcoin drop to lows around $3,000.

The following years, Bitcoin saw a stabilization as fringe, alt-coins were regulated and consolidated and a better understanding of Bitcoin and blockchain were unveiled.

So why is it different now? With Bitcoin at all time highs, testing $35,000 and a 330% gain in the past year, many investors are waiting for the other shoe to drop.

Especially, Peter Schiff, a notorious gold bug who has had it out for Bitcoin since day one.

Recently, Schiff said of Bitcoin, “The only valid reason to buy Bitcoin is thinking the bubble will get much bigger before it bursts.” Schiff paints a decent argument. This does feel a lot like 2017, with FOMO on the rise again.

Schiff already has a built in bias since he is one of the world’s largest gold bugs. And the primary defense of Bitcoin is that it is a better store of value against the dollar than gold is. And if Bitcoin can take market share away from gold as a digital currency, gold will depreciate.

The other factor is that, yes, there is a lot of FOMO right now but much of it is coming from the institutional side as opposed to the retail side in 2017.

Mainstream adoption of Bitcoin is quickly on the rise with major institutional investors piling into Bitcoin. Large companies like PayPal and Fidelity have made moves into the cryptocurrency. It also received endorsements from major investors like Paul Tudor Jones and Stanley Druckenmiller.

So, while the rise in Bitcoin does feel a lot like 2017, mainstream adoption and better understanding could keep this rocket fueled for the near future.

It was a weird year. Stay extra alert, do your own research, and make sure you are properly diversified to counter anydownside.