Natural Gas is up over 240% in 15 months. Crude oil is up 85% in the same time period. This exuberant recovery in global energy prices back above pre-pandemic levels has inspired numerous headlines, articles and blogs debating the surge’s causes and outlook. However, investors should be aware of Russia’s influence upon these markets. We’ll breakdown the Russian energy dilemma and where you should soon be looking to invest your energy dollars.

The recent rally in energy prices was not caused by any single event or circumstance. Rather, a multitude of factors have influenced the move:

These various influences have pushed natural gas and crude oil prices to highs not seen in years. 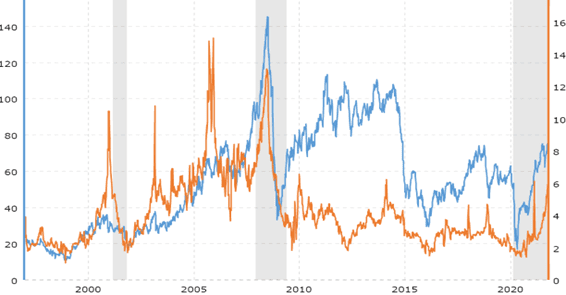 After the initial dramatic selloffs in the depths of pandemic-related recessionary fears, the energy markets have rallied remarkably on sustained expectations of global economies reopening and increased demand. Labor issues at production facilities, transport companies and ports have also reduced oil and gas inventories.

These heightened supply constraints are occurring during hurricane season, which has already temporarily sidelined Gulf of Mexico production after late August’s Hurricane Ida. At the same time, governments around the world have mandated lower CO2 emissions by 2030, reducing hydrocarbon energy capex spending incentives and initiatives, and moving heavy carbon users like China to switch from coal to gas.

Additionally, extreme weather fluctuations, especially as most of the developed nations approach winter, are fueling speculative demand for energy. And on top of all these, OPEC recently agreed to maintain limited production levels.  All these factors have combined to increase demand while diminishing supply, thereby raising prices. However, investors should not blindly follow the pundits who see the current influences as permanent. They fail to appreciate the economic and political dynamic of one of the world’s largest suppliers – Russia.

The Russian economy is no longer the strictly command economy utilized by the Communists until 1991. It is a mixed economy, similar to China, with capitalistic forces controlled and/or directed within certain industries and policies. The major difference between the two economies is that Russia only exports two products substantially: oil and gas.

Russia has the world’s largest natural gas reserves and holds the eighth in oil reserves and ranks second in global production for both. Due to these vast resources and geographic location, Russian is the main energy supplier to both Europe and Asia. This provides the government with particular leverage in foreign relations, known as “pipeline politics”.

While a major player in the global energy markets, the importance of oil and gas to Russia’s domestic economy can not be overstated. Depending upon the source, energy proceeds make up between 33% to 65% of Russia’s total revenue. (In contrast, energy makes up only approximately 5% of U.S. total revenues.) Economic and political security – the use of oil and gas as political bargaining chips – for Russia relies upon the ability to supply and monetize these resources. Unfortunately, Russian economic growth since the 2008 Financial Crisis has significantly lagged the rest of the world. 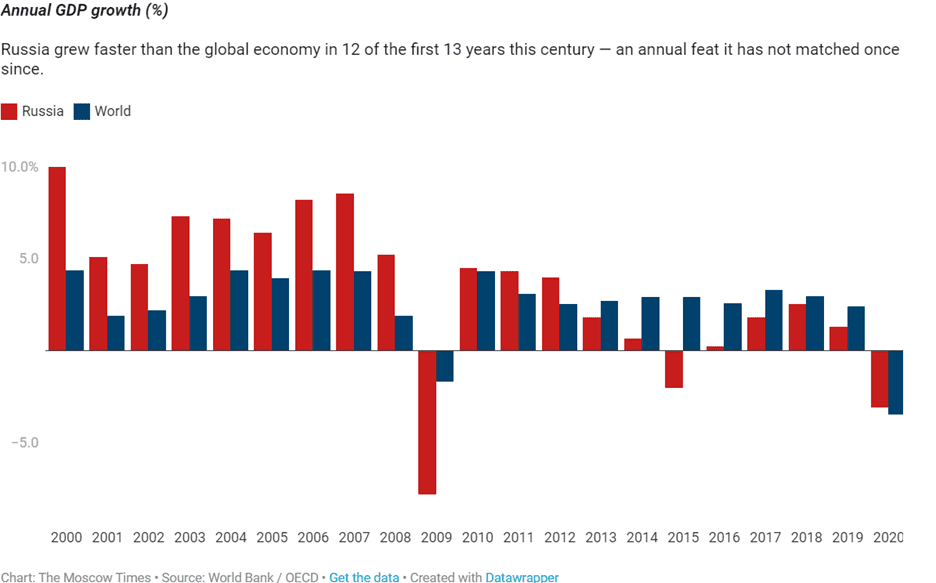 The Russian economy faces a number of headwinds beyond the impacts of the global pandemic.

The inability to generate growth stems from weak employment opportunities due to relatively low national investment in non-energy industries, a flight of migrant labor, diminished household spending (as a recent survey of Russian citizens indicate a generally bleak five-year outlook),  plus continued Western sanctions which restrict trade and borrowing capabilities.

With all these adverse trends, it is imperative that Russia takes advantage of the recent spike in energy to fund existing national expenses or further  investments or fiscal stimulus necessary for economic growth.

With oil and natural gas prices at post-pandemic highs, it makes sense for Russia to increase production in order to monetize their hydrocarbon assets. This is especially true as world leaders continue to mandate reduced greenhouse gas emissions, the potential for a Delta-variant lockdown, and also to maintain political influence with Western Europe and China. These trade partners will surely maneuver to alternative sources if prices continue to skyrocket.

This would lessen any economic clout the Russian government currently retains.

But what about the OPEC production limit agreements?

Unfortunately, Russia has a dismal track record of compliance, with numerous instances since 1998 of increasing production while paying lip service to agreed cuts. With basically a one-product economy, Russia has historically taken advantage of rising markets to enrich themselves no matter what is agreed upon in public. It would be foolish for investors to believe this time is different.

How to Play the impact of the Russian Energy Bear?

Energy prices have rallied significantly and any increase of Russian production – as one of the largest producers of both oil and natural gas – will be incrementally significant to the demand/supply equation.

As this will affect the commodity prices directly, purchasing inverse ETFs are the most effective and efficient way to play the impending Russian increase in production. KOLD, the 2X inverse natural gas ETF, SCO the inverse oil ETF, and DRIP, the 2X inverse oil and gas exploration and production ETF are all attractive ways to play a reversal in energy prices precipitated by Russian over-production