GameStop, a Short Squeeze, and a Wild Week on Wall Street

By now, if you haven’t heard, we just had a head-spinning week on Wall Street. Up was down, black was white, and near-nothing stocks like GameStop suddenly shot up 350%, passing stocks like Apple and Facebook like they were waiting at the bus stop.

In the flurry of activity, it became apparent that what was happening was a short squeeze. A short squeeze is when a stock or asset suddenly jumps in price and forces any investor who was shorting that stock to buy in to cover their losses. This buy in only adds to the upward pressure of the stock’s price.

In a complete turn of events, it turns out the major hedge funds, who were shorting these stocks, were the ones being squeezed by a band of social investors on a Reddit forum called WallStreetBets.

Hedge funds have been manipulating the market for years in much the same way, but it took a bunch of Reddit users with trading apps to really expose the deep inefficiencies in the market and the disconnect between price and value of a stock.

The biggest ramification from this week is that it has upset the balance of wealth in this nation, and created a new list of the richest people in the world: 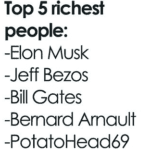 Of course, I’m kidding but when the dust settles, people will be asking three serious questions:

How Did this Happen?

We won’t bloviate, but to answer this question, you have to go back a few decades.

Back in the 80’s when the Gordon Gekkos and Jordan Belforts of the world were quickly finding ways to manipulate the market, the term “Dumb Money” was coined. Dumb Money refers to individual investors who try and to invest in the markets on their own, become financially literate, or simply try and realize some of the American Dream.

Conversely, the “Smart Money” are the major institutions, hedge funds and other financial professionals who, until this week, controlled the market movements and therefore profited the most.

What Smart Money didn’t count on was the incredible rise of technology that gave “Dumb Money” accessibility to amass in social communities. Then it equipped them with instant, trading apps like Robinhood that allowed users fee-free trades and margin accounts.

With camaraderie, trading apps, and an inherent anger toward Wall Street, this “dumb money” group identified distressed stocks like GameStop and AMC that were being shorted by Hedge Funds and poured their money into them. Many of these traders bought call options on these stocks which applied even more upward pressure.

The stock prices shot through the roof and the short-selling hedge funds were begrudgingly forced to buy into the stocks as well to cover their losses, further increasing the price.

What is the Fallout?

The fallout was fast and dramatic.

For the first time ever, trading apps like Robinhood restricted trades on the squeezed stocks like GameStop and AMC. This did not sit well with the trading population and Robinhood was quickly hit with class-action lawsuits which forced them to resume trading the very next day.

Other trading platforms like TD Ameritrade raised margin requirements and prevented shorts on these names.

The stock market also had a knee-jerk reaction, dropping more than 1% as major indexes were dragged down by the hedge funds selling off long position to cover the short squeeze.

David Madden, market analyst at CMC Markets UK, said “Fears are circulating that some investment funds might be quickly closing out positions as a way of shorting up their cash positions. It is early days yet but we might see selling pressure ramp up for fear there could be a stampede for the exit.”

As dramatic as the fall out was, it will be nothing compared to the reaction. Because Wall Street will definitely not be taking this lightly.

Both liberals and conservatives in congress were outraged. Less so that the short squeeze occurred but more so that the trading apps restricted trades. Congress has called for hearings about Robinhood’s decision to block retail investors from trading. For the most part, these hearings will likely result in more grandstanding.

Wall Street, however, is working with the SEC and calling for greater regulation to prevent this from happening again. And it is far more likely the SEC will have a greater impact. Right now, they are finding ways to remove the incentives from letting this happen ever again.

We could see the exchanges step in and limit options trading by placing position limits and other restrictions. We could also see outright bans on short selling altogether.

Some regulation may not be a terrible thing. Right now, confidence in the market is at an all time low. We knew that the stock market is not a reflection of the greater economy but there has never been a greater chasm between value and price right now. And what are we left with if we our markets are not fair and aligned?

Less talked about is the fallout that is happening with the brand new investor class that emerged from this. This entire phenomenon gave birth to millions of new day traders whose first experience in investing was short squeezing hedge funds.

This is like when you go to Las Vegas for the first time and hit black jack 4 times in a row. You are riding high but quickly find out that the house always wins.

If these new investors think this is how you accumulate wealth through the stock market, they are going to be in for a rough go.

I’m sure I sound like the fly in the punch bowl, but any new investor needs to take the time to learn the basic fundamentals of investing and take a measured approach.

This week will most likely have further ramifications on how the market operates in the future. I want to say this was a once-in-a-lifetime occurrence but we didn’t see this coming either.