Philadelphia Federal Reserve Board President David Harker recently stated that it will be a significant amount of time before the U.S. reaches the Fed’s primary goal of full employment. And in order to promote the necessary job growth, the Fed will maintain rates at historical lows for the foreseeable future.

While there are diminishing returns to their impact (see our previous article “Can the Fed Save T.I.N.A.?”), these prolonged low rates, coupled with trillions of dollars of stimulus and increased global vaccinations, are triggering inflationary expectations and investor concerns.

While some media headlines are cautioning investors that the inevitable inflation will erode consumer demand and corporate profits, the current reality is quite different. The Fed is trying to “reflate” the economy back to long-term levels of employment and inflation. With inflation at approximately 1.5% (utilizing either PCE or CPI metrics) the U.S. is currently well under the average inflation over the last 100 plus years of 3.10% and has been for over twenty years. 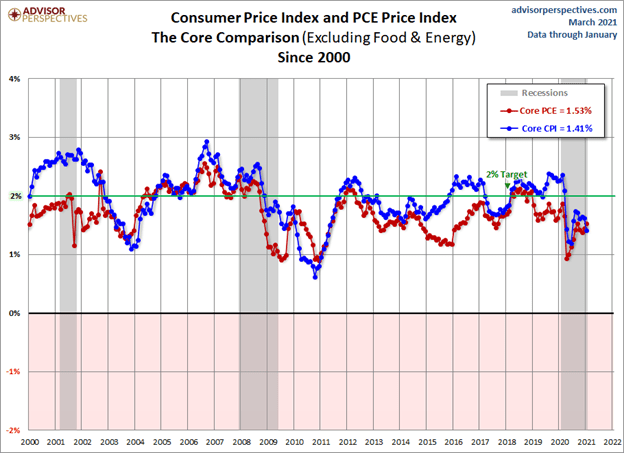 While in the early stages of the fragile pandemic recovery, the Fed is reluctant to tighten until absolutely necessary. Targeting a roughly 2.5% PCE inflation rate allows the Fed to press the economic gas pedal of zero Fed Funds until inflation reaches excessive levels – near 4% – before responding with higher rates.

Even with some uptick in rates due to inflationary expectations during reflation, consumers and corporations will continue to receive the benefits of relatively low historical interest rates.

Reflation can be thought of as “good” inflation brought on through reduced taxes, increased money supply or lowered interest rates. While the current administration will not be lowering taxes, the supply of money has dramatically expanded, and the Fed has pegged the Fed Funds rate to zero.

While reflation will cause consumer and producer prices to rise, so too will hiring, wages and productivity until the economy reaches full employment. That happens when all those willing and able to work are employed. Unemployment is not eliminated, however, due to structural and technology shifts in the economy. Once full employment is reached, “bad” inflation occurs – prices increase beyond wages and productivity, negatively impacting consumer spending, household savings and corporate profits.

The key to reflation, inflation and rising interest rates is to determine full employment. Unfortunately, there is not a single number or data point that represents this subjective value. The understanding of full employment has also changed as economic expansions and recoveries do not equally improve all demographics or socio-economic segments. However, Fed Chairman Jerome Powell has said the Reserve Board considers a broad range of indicators:

A look at these factors historically and pre-COVID provides an effective approximation of what the Fed considers full employment levels.

The U-3 Unemployment Rate is the most often statistic reported and counts the number of people seeking employment.

While often criticized as not depicting a completely accurate picture of unemployment, an examination of historical data indicates that around 4% unemployment rate as potential level of maximum employment.

Steady wage growth is another mark of a healthy economy. Pre-COVID levels between 4%-5% year-over-year growth would also inform the Fed that the U.S. is approaching full employment.

Obviously, full employment requires job creation. Data points prior to the pandemic indicate the addition of over 2 million jobs a year as a sign of a vibrant job market.

Ratio of Employment to the Population

This indicator measures the proportion of the working age (15 to 64 years old) population that is employed.

An upward trending number above 60% appears to be indicators of an economy working close to maximum employment.

The Labor Force Participation Rate measures the economy’s active workforce: those employed and those actively seeking employment. Since the Financial Crisis of 2008 and pre-COVID, the economy requires at least 62% participation to sustain growth.

Unfortunately, considering these metrics, our economy continues to languish, and we are nowhere near the subjective full employment levels targeted by the Fed. Therefore, we remain in a reflationary environment. While the current sharp market rally has extended valuations and a correction that shakes out some speculative froth – bitcoin, SPACs and NFTs – would not be surprising, investors should not fear that harmful inflationary forces are imminent. And remember, don’t fight the Fed!