Will Fear of Inflation and Crypto Volatility Drive the Price of Gold to New Highs?

Traditionally, gold has been used as a “store of value” against government backed fiat currency like the dollar. And when the dollar weakens during periods of inflation, investors often buy gold as a stable asset.  So, as the fear of inflation lurks on the horizon, investors are once again buying gold, sending the price of gold up 7% in the past month.

However, inflation fears have recently begun to recede as consumer spending and corporate profits show strong recovery. So, what else could be driving up the price of gold?

All signs are pointing to Bitcoin volatility.

An Unstable Store of Value

It was just about a month ago, when we saw Bitcoin hit an all time high of $64,000. Analysts and pundits were proclaiming Bitcoin to be the new “store of value” quickly displacing gold as an inflation hedge. In fact, there was circumstantial evidence that we began to see money flow directly from gold into Bitcoin. Pundits continued to heap praise onto Bitcoin, calling gold the weaker of the two “anti-fiat” assets and securing endorsements from high profile influencers like Elon Musk.

Then, in the blink of an eye, things changed…

Since hitting its all-time high of $64,000 last month, Bitcoin dropped to lows of $30,000 wiping more than half of its value off the map in just under two weeks.

The first domino to fall came in the form of a tweet from one of its biggest endorsers, Elon Musk. Musk, who not too long ago, sent the price of Bitcoin soaring by announcing that Tesla would begin accepting Bitcoin as payment, turned around and cancelled that idea on May 12, saying that the environmental impact was too detrimental from the energy used while mining Bitcoin. This sent Bitcoin’s price tumbling. To compound the downward pressure on the price, China published a sentiment that financial institutions should not accept virtual currencies.

In the blink of an eye, investors were reminded how sensitive Bitcoin was, when its price was so dramatically influenced by a regulatory statement from China and a tweet from this guy, seen here acting all innocent. 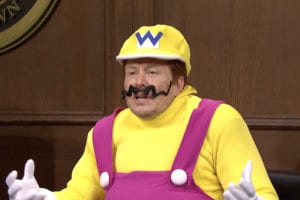 A Move Back Into Gold?

As the price of Bitcoin dropped, JP Morgan noted that its momentum signal dipped toward negative for the first time since March 2020. They also noted that much of the downward momentum was likely due to crypto funds and momentum traders letting up on their Bitcoin holdings. Investors offloaded their Bitcoin positions coincided with inflows into gold ETF’s.

This shows that the same institutional investors who helped propel confidence into Bitcoin were now seeking their way back into a more stable store of value in gold.

JP Morgan analyst, Niolaos Panigirtzoglou said, ” the reasons for the shift are unclear, but speculated that it could be concerns over bitcoin’s uptrend ending and gold’s stability looking more attractive. Alternatively, the price of bitcoin could now simply be too high relative to gold, prompting the rotation away from crypto and into the precious metal.”

JP Morgan stopped short of calling Bitcoin oversold. Despite it’s recent weakness, its long-term trajectory still looks pretty positive. After all, it’s still up over 300% in the past year.

A Gold Play for Inflation Fears

If inflation fears persist and interest rates rise across the board, as many investors expect, gold will be a great hedge as an investment.

A gold stock to consider here is Barrick Gold (GOLD). Barrick Gold stock has risen over 10% the past month and it has continued to show strong performance as its beaten EPS the past 4 quarters. It also yields a dividend of about 1%.

With recent crypto volatility and a potentially weakened dollar, we could continue to see Gold prices soar and Barrick Gold could potentially lead the way.