Would Higher Taxes Even Matter to the Stock Market?

Higher taxes are inevitable. President Biden campaigned on raising taxes to pay for increased social services, improved  infrastructure, and to ensure wealthy Americans and corporations pay their “fair share.” Now, within his first 100 days in office, his administration is proposing to increase individual, corporate and capital gains taxes. But will these new levies negatively impact the stock market? Do higher taxes even matter to the stock market at this point?

The various basic tax increases floated by the Biden administration are:

These are obviously targeted to the wealthy and Corporate America. The individual rate hike will impact the top 10 percent of the U.S. population’s top wage earnings, and the capital gains boost will affect only the top 1 percent. While these proposals are higher than existing rates, it is important to note that the government has increased the various taxes numerous times over the past decades. And the impact to stocks may not be as expected.

Tax History and the Stock Market

When the new capital gains rate was recently announced the market quickly reversed and dropped nearly 1 percent. However, stocks have rebounded to new highs despite the proposed increase. The selloff was a result of headline risk, where markets instantaneously react to events or news before full details are known. This is because markets hate uncertainty and will default to worst case scenarios when allowed. Subsequently, investors realize that the proposed rates are simply starting points for the necessary Congressional negotiations. Market players must then step back and determine the actual risk to wages, earnings and their portfolios.

Many investment firm pundits have demonstrated that tax increases have not impacted returns when enacted. Large, wealthy investors simply change strategies or wait for the inevitable favorable statute change. Tax increases to the wealthy usually mean increased payments to the poor, who spend instead of save or invest, thereby boosting economic activity and corporate profits. And government spending programs – such as infrastructure – funded by the higher taxes offset any negative impact to companies. Plus, the final increases will probably be negotiated lower than initially feared and impact fewer taxpayers. 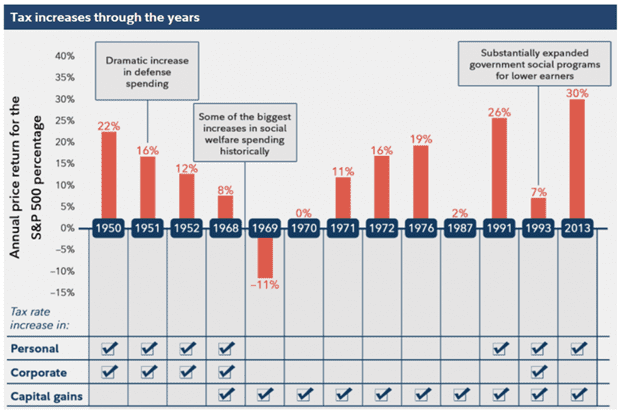 One can see that, except for the 1969 and 1970 capital gains increases, every other tax increase had positive returns for the market. And many pundits believe that none of this matters as long as the Fed keeps their foot on the economic gas pedal of near-zero rates.

In past Insight articles (Can the Fed Save T.I.N.A. and The Fed Wants Reflation. Don’t Fight The Fed) we have pointed to the importance of the Financial Crisis of 2008. Since then, the unique combination of historically low interest rates, low inflation and moderate GDP growth has been the norm. And there have been a number of underlying factors from the 2008 to 2010 period that continue to systemically impact this ambivalent economy:

A look at another chart comparing tax increases and equity returns by decades helps visualize this inflection point. 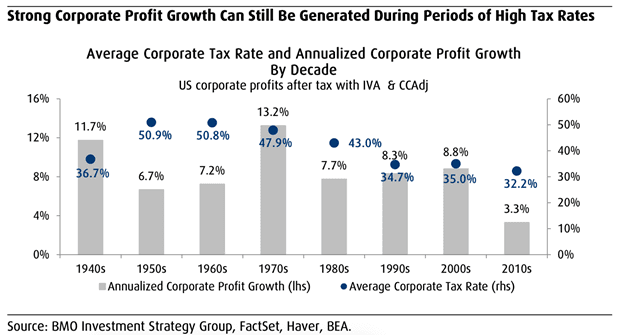 Historical data and outlooks are important. They provide foundations to establish benchmarks and correlations that enable investors to gauge and predict future outcomes. However, to ignore structural changes that may impact the predictability of those past data points can be fatal. As the stock market is driven by earnings, investors should be aware when they may change.

The Downside of Higher Taxes on the Stock Market

As with all statistics, there are many ways to look at the same information. A few market strategists have looked at the data and come away with different outlooks, especially when looking beyond the year of the tax hike enactment. 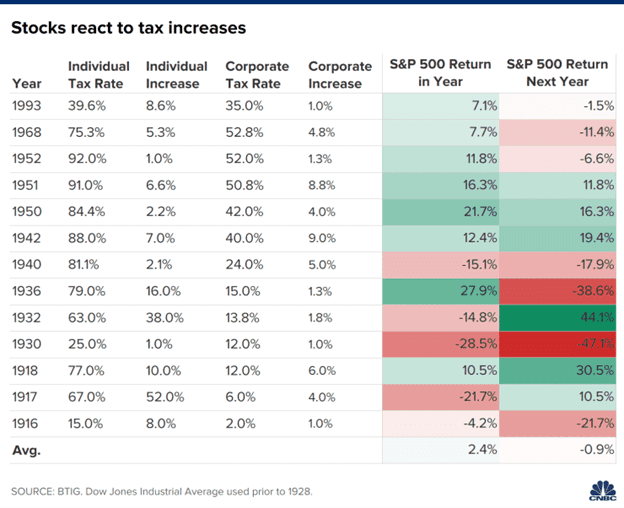 The returns in the following year present a different, more cautionary view. Some research indicates that if fully implemented, the Biden tax increases would negatively impact corporate EPS by 10%. While it may be impractical to assume these tax rates will not be negotiated lower to have any chance of Congressional approval, investors can not ignore the reality of reduced earnings.

Which Stocks are Impacted Most by Higher Taxes

With an increase in capital gains tax, stocks with the largest gains are most vulnerable for tax-advantageous profit taking. Many of these are the high-flying Technology  and Clean Energy sectors. Also, a tax on those making $400,000 and higher impacts roughly 10% of the population (think Baby Boomers) and could reduce their discretionary income up to 18%. Watch for stocks luxury Retail and Travel related stocks to possibly be impacted.

While we feel the current tax increase proposals by the Biden administration will not be passed as is, higher taxes are inevitable. And despite numerous voices promoting indifference, investors should be aware of both the headline and actual risks higher taxes present to their portfolios.